The End of Walmart Ad Match: A Shopper Perspective

Walmart Canada’s long-running Ad Match program allowed shoppers to save more money at checkout by matching advertised prices from other stores. Additionally, it helped the company prevent leakage and reinforced its reputation as a low-price leader. So when Walmart ended its Ad Match program last October, competitive retailers were quick to boost promotion of their own price-matching practices. But the big question became how would Walmart shoppers react to the end of Ad Match and to what degree would their behaviour change because of it?

We presented some answers in Numerator’s recent webinar, The Impact of Walmart Canada Discontinuing Ad Match: A Shopper Perspective, by unveiling the responses of over 800 Walmart Canada shoppers to the announcement of Ad Match ending. Key to our research was uncovering how this change impacted shopper attitudes and whether their reaction influenced their interaction with the retail giant.

The money-saving vehicles the majority of Walmart shoppers are familiar with are Rollbacks and Everyday Low Price (EDLP). In fact, only 45% of those surveyed knew Ad Match was an option available to them. Of those who did know about Ad Match, 75% were dedicated users.

Overall though, hardcore Ad Match users only made up 12% of Walmart shoppers. This low level of usage could have been a driving factor behind the company discontinuing the program. 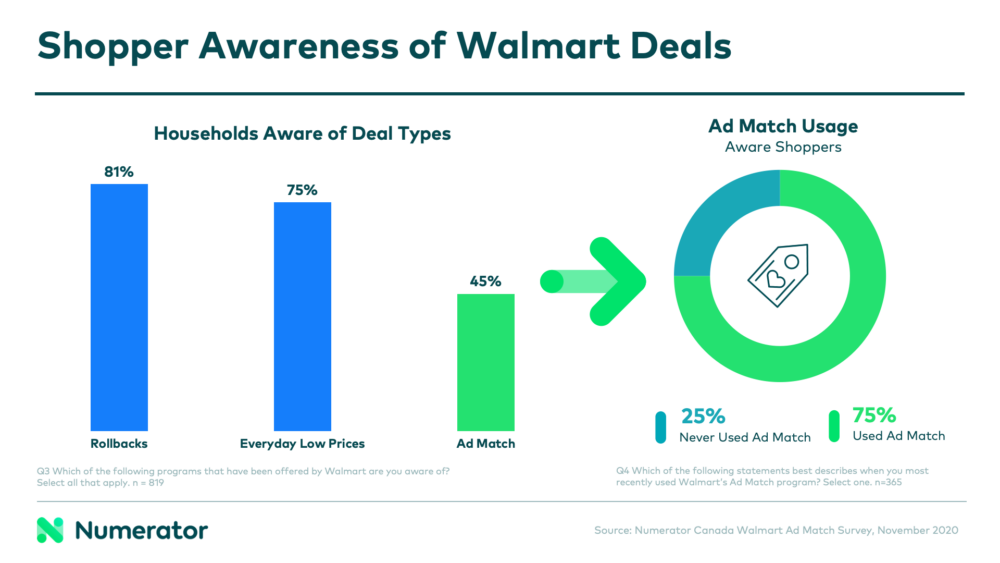 Of the shoppers who were aware of and used Ad Match, only 50% knew about the program ending. However, 64% said they were very or extremely disappointed over the news. In addition, 60% of these shoppers said the loss of the program would likely change the way they shopped at Walmart. They shared that they would consider making fewer trips or spending more at other price-matching retailers. 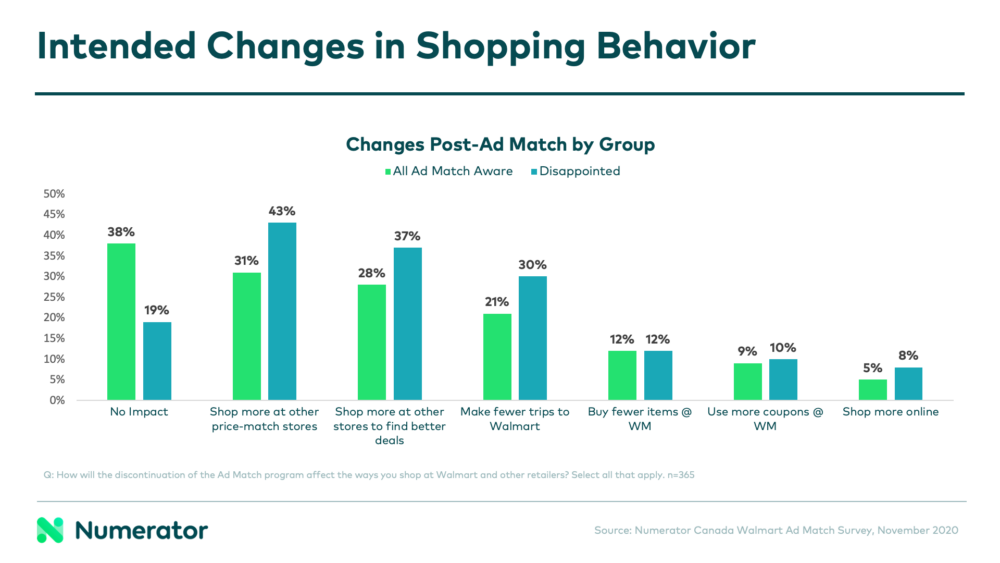 Consumer disappointment over the discontinuation of Ad Match did indeed lead to a shift in behaviour. While household penetration remained flat and spend per trip actually increased, trips per household dropped 24% among disappointed shoppers.

This drop isnotable because although trips are generally down among retailers due to COVID, trips to Walmart for this specific group of shoppers have dipped disproportionately from a year ago. This is particularly significant given we surveyed shoppers during a typically busy period that included Halloween and Christmas. Plus, Walmart’s loss led to visible gains in trips and wallet share at competing retailers across Discount, Conventional Grocery, Club, and Dollar channels, while Walmart’s share of wallet for disappointed shoppers indexed at 77 versus the same timeframe last year. 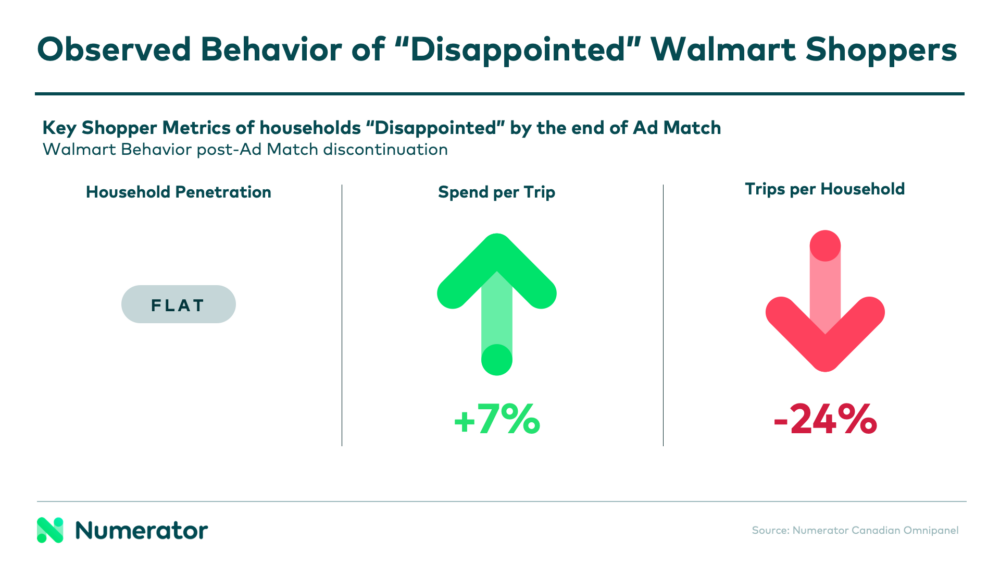 Walmart took a calculated risk ending their Ad Match program, likely with the knowledge that the majority of their shoppers wouldn’t notice or be impacted by the change. However, the consumers who enjoyed using Ad Match were unhappy over the loss of the program and shopped elsewhere as a result. Though Walmart’s topline sales continued to grow, it was perhaps at a lower rate than they could have experienced had they kept the program running.

What we’ll be watching in the months to come is whether these new behaviours stick or if Walmart will be able to win these shoppers back. In the meantime, we invite you to listen to the full webinar for greater detail on how the discontinuation of Ad Match affected shopper attitudes and actions and opened the door for gains at competing retail channels.

As always, we’re here to help. If you have any questions about the shifting behaviours of your shoppers, please contact your Numerator Customer Success Consultants or get in touch with us.

Thank you for subscribing for blog updates!